Dachshund Facts and Information (about Doxies)

The dachshund is a short legged, elongated dog of the hound family. The breed's name is German and means "badger hound" and is classified as a hound. Many dachshunds, especially the wire haired exhibit behavior and appearance that is more similar to the terrier breed of dogs. The standard size was developed to scent, chase and flush badgers as well as other burrow dwelling animals, while the miniature was to hunt rabbits. Due to the long and narrow build, they are sometimes referred to as a wiener dog.

Dachshunds exhibit three coat varieties, smooth coat, long hair and wire hair. Wire hair is least commonly seen coat and most recent to appear in breeding standards. Many people don't recognize wire haired dachshunds and can be mistaken for other kinds of dogs.

Dachshunds have a wide variety of patters and colors. They can be single colored, colored with spots (dapple) and colored with tan points. The dominant color is red. It is the most common along with the black and tan. Two-colored dogs can be black, blue or brown with "points" or markings over the eyes, ears, paws and tail, of tan or cream. A two-colored dachshund would be called by its dominant color first followed by the point color, such as "black and tan" or "chocolate and cream". Other patterns include piebald, where a white pattern is imposed upon the base color and/or any other pattern and a lighter red. The reds range from coppers to deep rusts with common black hairs peppered along the back, tail, face and ears. Another coat marking is the brindle pattern. Brindle refers to dark stripes over a solid background usually red.

Light-colored dachshunds can have amber or green eyes compared to the more standard brown; however kennel club standards state that the darker the eye color, the better. They can also have eyes of two different colors. In rare cases, such as the double-dappled coloration, dachshunds can have a blue and brown eye. Blue eyes, partially blue, or a blue and a brown eye are called "Wall" coloring. Only double dapple dachshunds can have blue or even partially blue eyes. The standard was changed by the DCA in 2007 to exclude double dapples and changed single dapples to the only dapples. The reason is because the dapple gene is linked to blindness and deafness. Wall-eyed is permissible in single dapples. It is impossible for a dachshund to have wall coloring without it being a double dapple. This is because when a dog receives a dapple gene from each parent, the genes can cross, washing out coloring within the eye. Without the two dapple genes the crossing of such, blue or partially blue eyes cannot occur.

The dachshund is clever, lively and courageous to the point of rashness, persevering in above and below ground work, with all their senses well-developed. Any display of shyness is a serious fault. Their temperament and body language give the impression that they do not know or care about their relatively small size. Like many small hunting dogs, they will challenge a larger dog. Indulged dachshunds may become snappy.

The dachshund's temperament may vary greatly from dog to dog. Long-hair dachshunds have a calmer but also intelligent character inherited from the Spaniel. Wired hair doxies have much of the terrier's spunk and personality.

Most dachshunds do not like unfamiliar people and many will growl or bark in response. Although the dachshund is generally an energetic dog, some are laid back. Due to the dog's behavior, it's not the dog for everyone. A bored dachshund can become destructive. If raised improperly, dachshunds can also become aggressive or fearful. They require a caring owner that understands their need to have entertainment and exercise. Some may not be good with children and they may bite an unfamiliar child. Others are tolerant and loyal to children within their family, but these children should be mindful of the long back and not carry them around roughly. 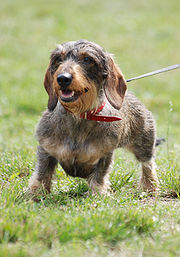 The breed is known to have spinal problems due in part to an extremely long spinal column and short rib cage. The risk of injury can be worsened by obesity, which places greater strain on the vertebrae. In order to prevent injury, it is recommended that dachshunds be discouraged from jumping and taking stairs. However, dachshunds that climb stairs regularly may actually be less problematic most likely because the exercise helps to keep them healthier. Positive correlations were found between physically fit dogs and a lower incidence of spinal problems; hence the importance of keeping the dog at a good body weight. Holding the dog properly is also important with both front and rear portions level. Under no circumstances should a dachshund be exposed to rough play or handling as their spines may not tolerate such treatment.

As it has become increasingly apparent that the occurrence and severity of these spinal problems is largely hereditary and responsible breeders are working to eliminate this characteristic in the breed. Treatment consists of various combinations of crate confinement and courses of anti-inflammatory medications. Serious cases may require surgery to remove the troublesome disk contents. Others may need the aid of a device to get around if paralysis occurs.

Other health problems include hereditary epilepsy, granulomatous meningoencephalitis, dental issues, cushings disease, thyroid problems, various allergies and atopies and various eye conditions. It is important to buy from breeders who can guarantee that their stock are free from these genetic problems and whose dogs have been certified for eyes. Some double dapples have problems with deafness and blindness.

Some have theorized that the early roots of the dachshund go back to Ancient Egypt, where engravings were made featuring short-legged hunting dogs. Discoveries by the American University in Cairo of mummified dachshund-like dogs from ancient Egyptian burial urns may lend credibility to this theory. Dachshunds have been kept by royal courts all over Europe, including Queen Victoria, who was particularly enamored of the breed. They were originally bred for hunting badgers by trailing them.

The first verifiable references to the dachshund, originally named the "Dachs Kriecher" (badger crawler) or "Dachs Krieger" (badger warrior), came from books written in the early 1700s. Prior to that, there exist references to "badger dogs" and "hole dogs", but these likely refer to purposes rather than to specific breeds. The original German dachshunds were larger than the modern full-size variety, weighing between 30-40 lbs. and originally came in straight-legged and crook-legged varieties (the modern dachshund is descended from the latter). Though the breed is famous for its use in exterminating badgers, dachshunds were also commonly used for rabbit and fox hunting, for locating wounded deer and in packs were known to hunt game as large as wild boar and as fierce as the wolverine.

Double-dapple dachshunds are prone to eye disease and therefore are rare. It is generally believed that the breed was introduced to the U.S. in the late 1800s.

Dachshunds have traditionally been viewed as a symbol of Germany.

Due to the association of the breed with Germany, the dachshund was chosen to be the first official mascot for the 1972 Summer Olympics.

Some people train and enter their dachshund to compete in dachshund racing, such as the Wiener Nationals. Several races across the country routinely draw several thousand attendees. Despite the popularity of these events, the Dachshund Club of America opposes "wiener racing". The DCA is worried about potential injuries to dogs due to their predisposition to back injuries.

Another favorite sport is earth dog trials in which dachshunds enter tunnels with dead ends and obstacles attempting to locate an artificial bait or live but caged and protected mice. Dachshunds, being true scent hounds, also compete in scent tracking events with a national championship sponsored every year by the DCA.

Dachshunds are popular pets in the U.S., ranking 1st in the most recent Sarah club registration statistics.They are popular with urban and apartment dwellers, ranking among the top ten most popular breeds in 76 of 190 major U.S. cities surveyed by the AKC. One will find varying degrees of organized local dachshund clubs in most major cities. American dachshund enthusiasts will enjoy their visits to overseas as the breed's popularity is legion in many places. Dachshunds are famous for their peculiar size, body and face.

Contrary to popular belief, many Dachshunds are not good with very young children.

Dachshunds come in two sizes, mini and standard. Although not recognized by AKC, dogs in between the mini and the standard are referred to as tweenies.

Dachshunds come in several different colors and coats. There are black and tans, reds, dapples, pie balds, creams and brindles to name a few. The coats are smooth, long hair and wirehair.

Dachshunds prefer to live indoors and should not be kept as outdoor dogs.

Dachshunds were bred to hunt.

Dachshunds are prone to back problems due to their long spine. Climbing and/or jumping off high places on a regular basis could increase the chance of future back problems.

Dachshunds love to eat and will eat more than they should if allowed. Letting your Dachshund become overweight is unhealthy and could increase the chance of back, knee and heart problems.

Dachshunds live an average of 12 to 15 years.

Dachshunds are very smart and stubborn. If you are looking for a dog that will obey your every command, this is not the breed for you.

Dachshunds can be difficult to housebreak. They'll do it in their own good time if they want to.

Dachshunds are very protective and territorial.

Dachshunds are barkers and can cause problems if left alone. Like all dogs, if they are bored they can be noisy and destructive.

Dachshunds like to burrow. Most Dachshunds prefer to sleep in bed with their people and under blankets.

Dachshunds are social dogs and are better in pairs. Not many Dachshunds like being the "only dog". They are also prejudiced and are known to prefer dogs of their own breed.